Microsoft announced the new .NET 5 (future of .NET) in Build 2019 conference. .NET 5 will be the single unified platform for building applications that runs on all platforms(Windows, Linux) and devices (IoT, Mobile).

If you are .NET developer currently supporting enterprise applications developed in .NET framework, you need to know how the .NET 5 is going to affect your current enterprise application in the long run. .Net 5 is based on .Net Standard which means not every .Net framework features will be available in .Net 5. Also, there are some technology stacks like web forms, WCF and WWF is not porting into .Net 5. We will look into the details of what is not covered in .Net 5 and what are the alternatives.

Technology stacks not coming to .NET 5

Asp.net Web Forms will not be coming to .NET 5 and Microsoft is currently recommending to move to Blazor which is an experimental project got promoted to official recently. The other alternatives choices are Angular, React and Vue SPA framework if you are good at JavaScript.

If you are currently using Asp.net MVC as full stack web app, you can continue to use the same stack by using Asp.net Core MVC or the new Razor Pages introduced in .net core 2.0 which may look similar to asp.net web forms to build web form application without views and controllers quickly. However, if you are developing modern web applications for enterprise, its better to consider single page application such as blazor, angular or react instead of a traditional web app for providing rich client-side functionality.

The announcement of WCF going to miss the .NET 5 train surprised many including me. There has been a lot of discussion in GitHub to bring back WCF into the .NET core, but Microsoft decided not to bring it because their initial estimation porting WCF into.NET core would take three years. (source : DotNetRocks Podcast)

Microsoft is recommending to use gRPC as an alternative which is a modern open-source high-performance RPC framework that can run in any environment. However, unlike WCF, gRPC cannot be hosted in IIS as of today because of HTTP/2 implementation of Http.Sys does not support HTTP response trailing headers which gRPC relies on.

Workflow Foundation is not getting ported into .Net Core. Every enterprise application will have some workflow or BPM tools integrated with it. If you used WWF in your application, Microsoft is recommending to look at the unofficial fork of WF runtime for porting into .Net Core.

Technology stacks that are coming to .NET 5

Microsoft is bringing Windows Desktop Packs (winforms , WPF and UWP) to support desktop applications which only works on windows. I wouldn’t expect anyone to use winforms for any new development however this will help to port legacy winforms applications into .NET 5. This doesn’t mean that .Net core architecture is changing. It will still be cross platform framework but when you are adding desktop packs, it target to work only on windows. However, porting existing windows desktop application into .Net core will give the additional benefit of Core Runtime and API performance improvements and deployment flexibility. 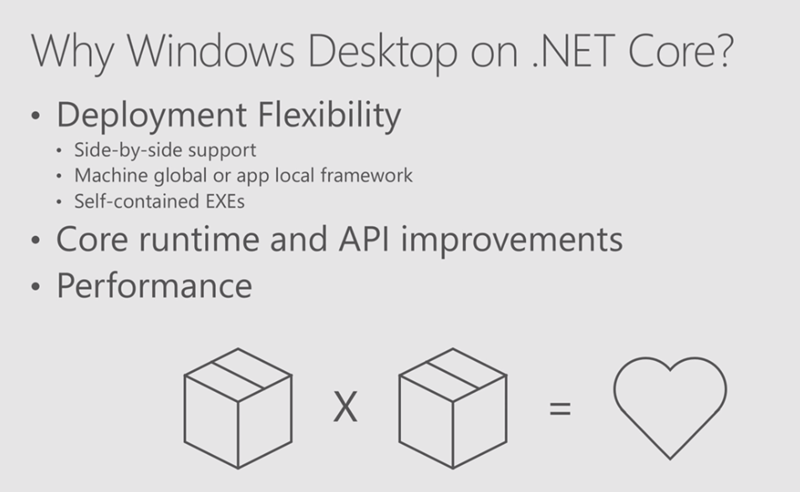 Few other important things to highlight

The latest version of C# 8.0 introduced a lot of new language features including Async Stream, Ranges, Nullable Reference Types, and Pattern Matching, etc.. However, they are going to be available only on .Net Core 3.0 and above which means it is not coming to Legacy .Net Framework, or .Net Core 2.2 , 2.1, 1.0. It clearly indicates that “.Net Framework is dead and .Net Core is the future”.

If you are planning to port .Net Framework application into .Net Core, you will have to analyze your APIs used in your project to see what is compatible or not. .Net Portability Analyzer is a tool that helps to analyze and determine how flexible your application is across .NET platforms.